Is. 51:1 “Listen to Me, you who follow after righteousness, You who seek the LORD: Look to the rock from which you were hewn, And to the hole of the pit from which you were dug.
Is. 51:2 Look to Abraham your father, And to Sarah who bore you; For I called him alone, And blessed him and increased him.”
Is. 51:3 For the LORD will comfort Zion, He will comfort all her waste places; He will make her wilderness like Eden, And her desert like the garden of the LORD; Joy and gladness will be found in it, Thanksgiving and the voice of melody.

When the Lord wanted to create a people for Himself, he called a man from an idolatrous family, gave him a barren wife, and waited till they were both unfit physically to propagate.

When the Lord wanted to redeem a people for Himself, he first gave them over to bondage to a great nation and then led them out straight through the sea on dry ground.

When the Lord determined it was time to bring salvation on the earth, He sent His Son, His co-equal, who stripped Himself from all privilege and glory, came in human flesh, and won the greatest of all battles, in weakness, by dying on a cross.

Far from being theoretical, this is the way God often works in our lives. “He weakened my strength in the way; He shortened my days.” Psa. 102:23 Why does God work this way? That it might be all of Him. For “it is on the nothing in man that God establishes His greatest works.” (1)

These things are hard for us to receive. We expected that we would go from strength to strength once saved, from blessing to blessing unto unimaginable bliss. But we see in scripture that the way to the banquet leads us through the valley of the shadow of death. (Psalm 23)

“He destroys that He might build; for when He is about to rear His sacred temple in us, He first totally razes that vain and pompous edifice, which human art and power had erected, and from its horrible ruins a new structure is formed, by His power only.” (1)

Many Christians expected Israel’s restoration to be from glory to glory, but it has not been so, and right now, It is a spiritual wilderness. But God has said: “For the LORD will comfort Zion, He will comfort all her waste places; He will make her wilderness like Eden, And her desert like the garden of the LORD; Joy and gladness will be found in it, Thanksgiving and the voice of melody.” Is. 51:3

Tonight, on the eve of the Day of Atonement, I will be giving thanks for the greatest thing that has ever been done in the universe. God’s Son was crucified in this city. He died in weakness, He was raised by power, and is coming back in glory, to fulfill every Word He has ever uttered.

Meanwhile, I will give heed to God’s call to “Listen, look, awaken” to His ways, to Himself, that I might not faint, nor resist His working in Israel, and in my life. And I will wait on Him in faith.

And so should you.

Author: Ofer Amitai, Messianic pastor Jerusalem and Director of Israel Prayer Centre     What right has my beloved in my house, when she...

END_OF_DOCUMENT_TOKEN_TO_BE_REPLACED

Author: Ofer Amitai, Messianic pastor Jerusalem and Director of Israel Prayer Centre     "Another parable He spoke to them: "The kingdom...

END_OF_DOCUMENT_TOKEN_TO_BE_REPLACED 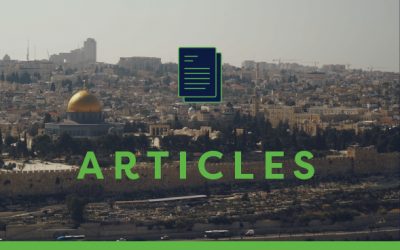 A call to prayer