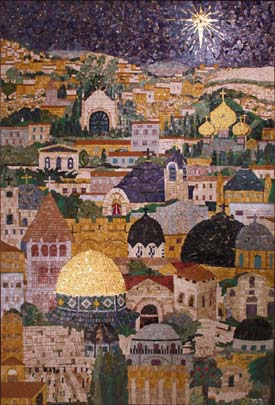 
To send a donation please visit our donations page.

"For he himself is our peace, who has made the two one and has destroyed the barrier, the dividing wall of hostility, by abolishing in his flesh the law with its commandments and regulations."
Ephesians 2:14 - 15

"I have other sheep that are not of this sheep pen. I must bring them also. They too will listen to my voice, and there shall be one flock and one shepherd."
John 10: 16

"This mystery is that through the gospel the Gentiles are heirs together with Israel, members together of one body, and sharers together in the promise in Christ Jesus."
Ephesians 3:6

"He came and preached peace to you who were far away and peace to those who were near. For through him we both have access to the Father by one Spirit."
Ephesians 2:17 - 18

"His purpose was to create in himself one new man out of the two, thus making peace, and in this one body to reconcile both of them to God through the cross, by which he put to death their hostility."
Ephesians 2:15 - 16