It’s been three days since the ceasefire between the Hamas and Israel began.  We had 4,360 missiles launched at Israel from Gaza which were aimed purposely at population centers.  The Iron Dome which is the Israeli anti-missile defense system was able to intercept 90% of the missiles aimed at the population centers. What may be surprising to many is that each Iron Dome mobile battery launcher has a price tag of about $100 million and each interception missile fired costs Israel $50,000. In
contrast, Hamas missiles are  domestically made while others were smuggled in from Iran, and the cost is $800 per missile. Even though war is extremely expensive and puts a heavy burden on the tax payer, Israel has declared that the value of human lives whether on the Israeli side or the Gazan side overrides the cost. Even with that, and Israelis going into bomb shelters at all hours of the day and night, we suffered 12 deaths during the 11 day operation, 11 civilians and one soldier, with many wounded.  Our missiles  were aimed to hit specific military and Hamas operational offices, weapons launchers, weapons depots, tunnels  and buildings like communication centers,  and not random population centers.  The Israelis destroyed 100 kilometers (60 miles) of tunnels in Gaza.  These highly sophisticated tunnels are used to move troops, weapons, and supplies, and are used as bomb shelters for the Hamas senior leaders. One of the main reasons they were built is to be able to travel underground  unhindered throughout Gaza and to pop up in different areas by surprise as the entrances are very well camouflaged and many entrances are located in hospitals, in kindergartens, and residences. This is in order to ambush, kill and kidnap Israeli ground troops if they would have entered on the ground as in previous wars.  Some tunnels are not that deep, no more than 3 meters (10 feet)  while others are at least 20 meters (65 feet) deep in the ground, which is 6 stories down (see diagram). 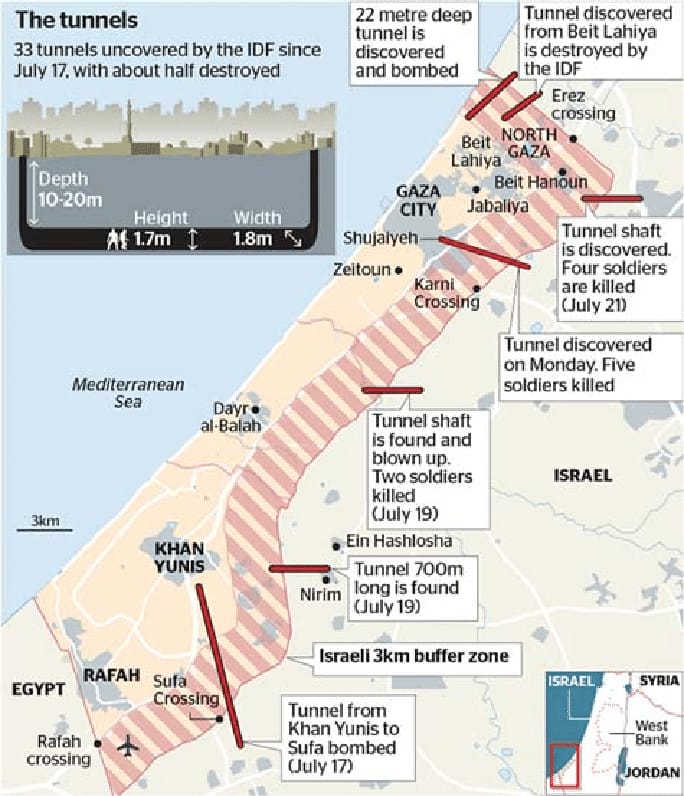 Over 200 Hamas militants were killed in Gaza including 25 Senior Hamas leaders. Some Gazans were killed and wounded by the many missiles that were misfired and fell on their own civilians.  There were also two explosive laden drones (suicide drones) that were shot down by the Israelis before they were able to achieve their objectives. We also had cyber attacks from the Hamas, as well, and all these things being aided by Iranian military advisors. All major airlines cancelled flights to Israel, diverting them to other countries as missiles were targeting our international airport which was then shut down.  All schools in the south and center of the country were shut down in order to keep children safe with their families, next to their bomb shelters as sirens sounded practically every hour night and day with barrages of missiles being fired constantly, trying to overwhelm the Iron Dome system and the security services.

Missiles were launched on three different occasions from Lebanon on our northern border.  They either fell in the ocean, didn’t make it over the border into Israel or fell in open spaces.  One missile was intercepted by Israel.  Neither the Lebanese government or the Hezbollah terrorist, Iranian backed organization claimed responsibility for the failed attacks.  Israel answered by striking the positions from where the missiles were fired. There were no injuries on either side.

Throughout the conflict I have been keeping in close contact with the ex-Muslim believers and by God’s grace they have been trying to take care of one another during this time, praying and encouraging themselves through God’s Word. This is the beginning of victory and in this I do rejoice.

This morning I had an opportunity to meet with and speak to some of my Muslim friends who are not believers, and we talked very frankly behind closed doors. These are people that I have developed friendships with over the years, while sharing the Good News  that Yeshua died on the cross for forgiveness of sins and resurrected for Jews and Arabs alike.  They have received Bibles and literature also. By the grace of God I have gained their trust and we can speak openly. They don’t live in a free society, and if their opinion does not match their political leaders’ narrative, it is highly dangerous for them and their families, whether they live here or abroad. They said “We gained nothing in this conflict. We lost many lives and the families with their children whose homes were destroyed because the Hamas leadership in Gaza used them as human shields in the conflict, are living in the streets, and will remain homeless for a long time. The leaders were sitting in their air conditioned shelters while the poor people bear the consequences. Even though millions of dollars and Euros will be pouring in from the international community”, they said, “we assure you that the homeless will never benefit from it.”  They said, “Israelis lost their homes due to missiles but your government will help them to recover, but our leaders will put the money straight into their pockets, distribute it to their close friends and family, and will rebuild the underground tunnels in Gaza for the next war.”

It is important to understand that for those who are Islamic fundamentalists like Hamas, Islamic Jihad and Hezbollah and others like them, Islam forbids them to make permanent peace treaties with “the infidels”, Christians whom they call the Sunday people and Jews, whom they call the Saturday people . In their charters it is stated that their aim is to destroy Israel and eradicate the nation from the region and return the land back to Islam. So they make it very clear that this is just a short break until the next war. This ceasefire is called a “Hudna” in Arabic which is defined in Islam as a truce or ceasefire for a certain duration until the enemy is weak enough for Islam to overcome it. At this particular point their strategy is for the war to be broadened inside of Israel itself and for jihadists and their people who are living in Israel to carry on a third intifada (uprising), to carry out terror attacks and provoking Israeli Arabs to join in violent attacks and protests with the aim to divide Jewish and Arab friendships. Israel has been waging a media campaign with commercials featuring Israeli Jews and Arabs who have worked together and lived together in unity for decades, saying they do not agree with violent protests and hate.

Of course their campaign of misinformation to the Western World continues along with objectives to carry out attacks on Jewish communities and institutions. Another goal is their campaign of intimidation and fear on Western governments and individuals by their violent protests.

The Bible says that Yeshua and His love are the perfect bond of unity. Everything that is taking place has already been prophesied in God’s Word and is a preview of things to come.  The main thing as Yeshua said, is to preach the Good News to all the nations, and to keep watch and be prepared for His coming.  If death knocks on our doors before this, that we should be ready on that day.  Please pray for both the Jews and Arabs.

David and his wife Leah, live in Ariel in central Israel where they pastor a Messianic congregation.

END_OF_DOCUMENT_TOKEN_TO_BE_REPLACED 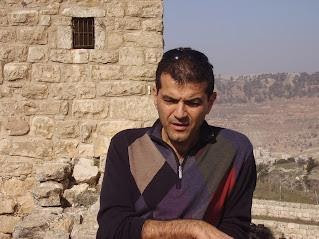